Themed “Investing in a New Vision,’’ the academic ceremony was held March 2 at the Duncan Theatre on the Lake Worth campus. Attendees included the Florida College System chancellor, college and university presidents, lawmakers and business leaders.

During her address, Parker announced PBSC’s $1 million gift from Palm Beach Gardens couple Jan Winkler and Hermine Drezner and appealed to others to invest in the College. She also reinforced the College’s commitment to students, their families, the community and businesses. “We will richly invest in each of our constituents to ensure a return for Palm Beach County and the state of Florida,’’ she said.

She said the College would be strategic with its internal initiatives and strengthen its partnerships with businesses, Florida Atlantic University and others to ensure students are academically prepared for a fast-changing, technology-driven workforce.

Speakers during the nearly two-hour ceremony highlighted Parker’s passion, tenacity and leadership. She became the College’s first female president July 1, 2015, succeeding Dr. Dennis Gallon, who retired after 18 years and assisted trustees with the investiture of Parker and the presentation of her medallion.

The historic event concluded a week of activities, including a collegewide student day of service that tied into the Feb. 27 opening of PBSC’s fifth campus in Loxahatchee Groves. After the ceremony, attendees streamed out of the Duncan Theatre to a musical celebration by PBSC’s drumline and a dancing panther mascot. A welcome reception with live music and food was then held in Parker’s honor under a lighted tent on the Campus Commons behind the Administration building where her office is located. 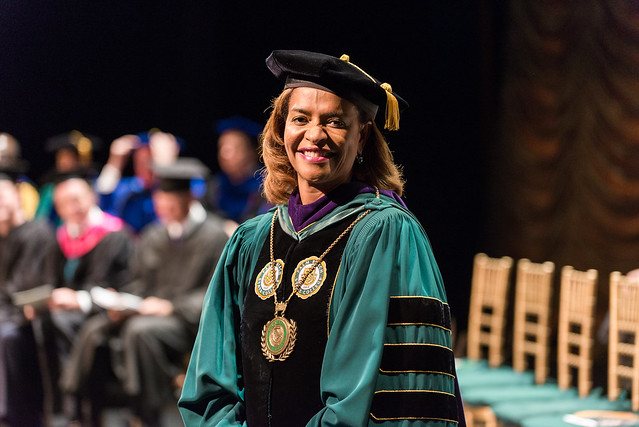