Dressed in academic regalia on a steamy Friday morning, Palm Beach State College President Ava L. Parker, J.D., stepped to the podium in the packed Duncan Theatre. Within five minutes, she had the crowd of new students on their feet and chanting.

That Lake Worth campus New Student Convocation on the first day of fall classes was Parker’s first time addressing an audience of Palm Beach State students and their parents since becoming the College’s fifth president and first female chief July 1. Before the chant, she spoke briefly and passionately, without notes, connecting the students’ new educational journey with hers as the leader of Florida’s seventh largest college with 48,000 students.

Her energy on stage that day has been consistent during her first busy five months on the job, as she gets to know PBSC employees and students and the key leaders in Palm Beach County.

“I’m proud to be here, and I want that level of excitement to be felt throughout our organization,’’ Parker said. “It will be infectious for the students.”

Genuine Leader
Parker has been doing a lot of listening, asking questions and getting input on the College’s priorities. She has taken immediate action on some matters, which generated positive responses. For example, she received booming applause from faculty and staff after announcing during faculty Convocation that she was reinstating coverage of transportation expenses so they can attend approved professional development conferences. “Who wants to go if you’re not going to pay for me to get there, right?” she quipped. “I want you to see the best and brightest ideas in your areas so you can bring those ideas back to our campus.” 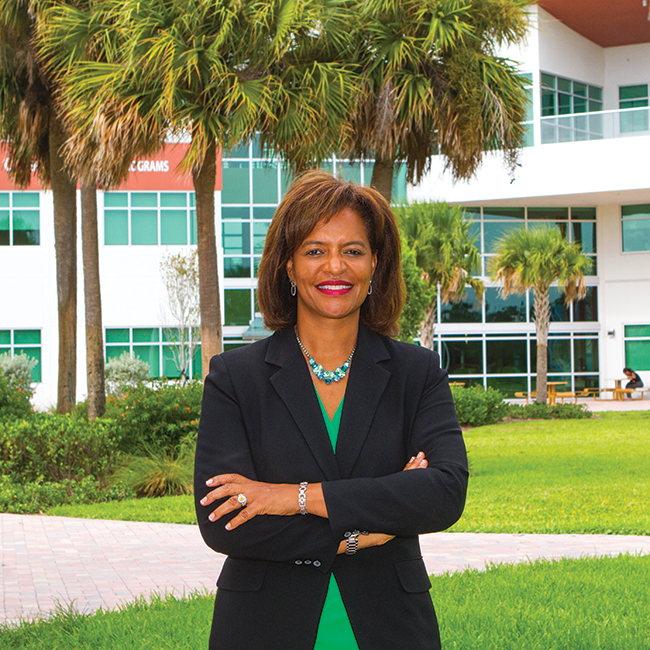 Parker also assured faculty that she will meet regularly with their union leadership to address faculty concerns and create opportunities for the District Board of Trustees to learn more about them and their work.

“I think she’s doing a great job so far, not just because of what she said at Convocation, but she did follow up on all of that,’’ said Professor Nicholas LaRocca, president of the United Faculty at PBSC. “On top of that, she seems really into what faculty do in the classroom and our roles. She genuinely seems to want to understand our point of view and consider it. It seems that when she says something, it’s the truth.”

While she wants to get input before updating the College’s priorities and agenda, Parker already has laid the groundwork. At every opportunity, she encourages faculty and staff to be “innovative,” to “think outside the box,” and to “bring your ‘A’ game to work every day.” She also has vowed to improve communication and change the culture of PBSC to reinforce its standing as one college with multiple campuses.

“I am challenging myself to make a good institution better,’’ she said. “The issues that I am discussing now will be the foundation of whatever we do in the future. We’ve all learned that we are more successful if we collaborate and work together.”

Parker came to Palm Beach State from Florida Polytechnic University, where she served since December 2012 as executive vice president and chief operating officer. The Lakeland school was a satellite campus of the University of South Florida in Tampa until state law earlier that year made it an independent institution. Parker was the first administrator hired for the state’s 12th public university, and she was responsible for shaping its mission and vision, overseeing the campus development, hiring staff to prepare for the inaugural class in fall 2014 and helping the school pursue accreditation.

An attorney who earned both her juris doctorate and bachelor’s degree in journalism from the University of Florida, Parker, 52, elevated her career on the policy side of higher education. She was appointed by former Gov. Jeb Bush in 2001 to the inaugural Board of Trustees for the University of Central Florida after state lawmakers abolished the Board of Regents and created boards at each state university. When a 2002 constitutional amendment created the Board of Governors to oversee the state universities, Parker was then appointed by Bush to the inaugural 17-member BOG and reappointed by former Gov. Charlie Crist and Gov. Rick Scott. She served for about 10 years on the BOG, including terms as vice chair and chair, before resigning to take the position at Florida Poly.

A native of Santa Rosa County, she worked as an assistant public defender for Miami-Dade County and served as general counsel for the 11th Episcopal District of the African Methodist Episcopal Church and for Edward Waters College in Jacksonville. Married to former State Rep. Joe Gibbons and the mother of 6-year-old boy and girl twins, she most recently worked in private practice as a partner in the Jacksonville firm of Lawrence & Parker.

Parker said her higher education governance and legal experience have prepared her to lead Palm Beach State at a crucial time with the arrival of state-mandated performance-based funding and construction underway for a fifth campus in Loxahatchee Groves.

“I feel honored to have the opportunity to lead a complex, dynamic organization at a very interesting time. Higher education is changing to meet regulatory demands and to respond to savvy students,” she said. “This is a strategic time in the life of the institution.”

Wendy Link, chair of the District Board of Trustees, said she appreciates the strategic approach that Parker brings. “I believe she brings a new energy to the school and is looking at it with fresh eyes. She’s looking for that strategic edge as it relates to growth, improvements and partnerships.”

From law to education
Parker said because performance-based funding started while she served on the Board of Governors, she understands the model and is prepared to help the College meet its performance targets. Of the three possible funding levels for the 28 state and community colleges – gold, silver and bronze – Palm Beach State falls in the middle.

“Some of the metrics are difficult for an open access institution, particularly when many of our students work and go to school. But the current metrics will make us focus on areas that are important for our students’ success,’’ she said.

“I understand that performance funding is here to stay, and I approach it with the attitude that it’s good for us because it’s reasonable for the state to ensure quality for our students and return on its investment. “We are already analyzing our data, and we are going for the gold.”

Making her mark
A 3-D printed model of the Loxahatchee Groves campus sits on a table in Parker’s office. She glances at it and smiles as she discusses how the campus fits into the future of the College and the growing west-central communities it will serve. She knows that the building’s imprint will be connected to her predecessor, Dr. Dennis Gallon, who retired in June after 18 years as president and whose name the campus will bear. However, the direction of the campus and its success falls on her shoulders.

“I have a great deal of respect for Dr. Gallon’s work, and I feel a huge responsibility to build on his legacy,” she said. “I’m excited about the opportunities that you have when you start something new, and I’m challenged by the issues, like funding, that we have to pull together to make it happen.”

Responding to labor market data, Parker presented a proposal for science and technology to be the initial focus of the campus, making it the base for existing high-demand health care and technology associate degree and certificate programs and the Bachelor of Science in Nursing degree program. The initial phase also will include courses for the Associate in Arts degree. The District Board of Trustees gave her the green light in September.

“I see this as a wonderful opportunity for me to refresh the brand for our institution,’’ she said. “That is why I am so interested in innovative programs. I want Palm Beach State to be known as an innovative, cutting-edge institution that is listening, changing and moving to where the puck is going.”

Parker said getting faculty and staff to consider new ways of doing business and reaching students will be critical for the continued success of the institution and the students. “That’s the only way you can be responsive to the kind of environments that students are going to find themselves in. Our students will need basic skills, but they’re also going to have to know how to think critically and do things differently in order to be competitive,’’ she said. “If we don’t think like that there’s no way we can bring that to the table for our students. We have to lead by example.”