Six vivid paintings of Roosevelt Junior College alumni and staff hang from a wall on the second floor of Palm Beach State’s Lake Worth campus library.

Other than a whirring printer, it is quiet on this particular day. Across the room, students are busy at computer stations, some with headphones draping their ears. Most of them are millennials unfamiliar with the stories and the history behind the images of Ineria Hudnell, Bettye Dawson, Margaret Richardson, Jacquelyn Taylor Cotman, Idella Wade and Robbie Littles –but they are curious.

Geansli Joseph, an up-and-coming artist and Palm Beach State College graduate, painted the portraits as a contribution to an expansive project to preserve the history of the all-black junior college that merged 50 years ago with mostly white then- Palm Beach Junior College, ending segregation of higher education in Palm Beach County.

Underneath each portrait is a QR code that links to an oral history project with interviews of seven RJC alumni and staff and a local attorney who was on the Board of Public Instruction when it voted on April 7, 1965 to close the school at the end of that academic year. By then, PBJC had integrated only sparingly, with 63 blacks among its 3,000 students, according to a newspaper report. But, the majority of the black junior college students in Palm Beach County were at RJC, where enrollment had reached 200.

“We should all know the history of what happened. I think that’s important so we don’t climb back into that situation again,” said Palm Beach State student Johnny Salomon, an aspiring physical therapy assistant who was on the library floor studying.

“If you’re going to go to a school, you should know something as important in its history as two colleges merging,’’ said student Victoria Beuthien, whose goal is to be become a surgical nurse.

RJC was hastily built in 1958, despite objections from a group of black leaders who considered it an attempt to avoid integration, given that the U.S. Supreme Court decision Brown v. Board of Education in 1954 had ruled segregated schools unconstitutional. However, many, particularly current and former students who had fought to keep RJC open, weren’t against integration. They wanted to keep the campus on 15th Street in West Palm Beach available as a branch.

In addition to the oral history project and the digitizing of RJC artifacts, including yearbooks, commencement programs and photos, the College also has made a concerted effort over the last decade to continue reaching out to RJC alumni and staff. Among the initiatives, the College organized the first RJC reunion in 2005 that drew more than a hundred people. From that event, an RJC Alumni Association formed and began meeting regularly. In 2006, the College involved the group in a rededication of the newly renovated Britton Sayles Social Science building that more prominently displays the RJC president who also served simultaneously as the principal of Roosevelt High School.

Although the District Board of Trustees named the Social Science Building on the Lake Worth campus in honor of Sayles, some RJC alumni and staff, still hurt by the abrupt closure of their college, felt that more work was needed to keep its history alive. So, now retired Palm Beach State president Dennis P. Gallon, who had joined the College in 1997, worked to advance the efforts started under his predecessor, Dr. Ed Eissey.

With the outreach events for RJC alumni and staff and all the initiatives to preserve the RJC history and incorporate it into the College, RJC students and alumni say that they feel more a part of the College, and they credit Gallon.

“We’re happy now,’’ said Bettye Dawson, who was in RJC’s first graduating class. “He did a good job of merging us. I really do feel a part of Palm Beach State College. I never felt like that before Dr. Gallon came.”

“I give Dr. Gallon all the credit. We wouldn’t have that history and the community wouldn’t know that much information about the history,’’ said Mary McGee, a 1963 RJC graduate whose grandchildren currently attend Palm Beach State College.

“The College has been very instrumental in sponsoring events as part of keeping before the public the merger of the two institutions,’’ said Paul Butler, who served as dean and registrar at RJC. “Dr. Gallon has had a continuous series of events that intensifies the fact that there was a merger.”

Brian Kelley, Palm Beach State Lake Worth campus library director, led the oral history project with Juanita Hook, employment manager and assistant to the president for equity programs. Kelley said the history of RJC is important to the overall history of the College.

“I’m very proud to have been a part of it,” Kelley said. “It was an educational experience for me to learn more about the history of Roosevelt Junior College and to actually get to know some of the people involved.”

“One of the most important initiatives the College has launched is the RJC oral history project,’’ Hook said. “This is an aging population, and so we definitely want to preserve their experiences as spoken by them. The oral history project was a very critical way of ensuring that those experiences good or bad were documented firsthand. That’s going to be so beneficial in looking back.”

Shifting demographics
In the 50 years since the merger of the two junior colleges, Palm Beach State has seen a significant shift in its demographics. With 58 percent of the student population now minorities, including 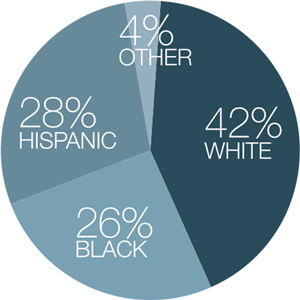 26 percent black and 28 percent Hispanic, Palm Beach State is one of the most racially and ethnically diverse colleges in the Florida College System and the state. That trend is expected to continue.

Dawson said this is partly why she’s happy that RJC’s history has been preserved. “We know that as long as we’re alive we will always know that we were a part of it. But if it’s there, some of the young people are going to look at it and question and read more about it,’’ she said. “I want them to know our history.”