After securing $6 million in legislative funding last year toward construction of the first building, Palm Beach State College is slated to open its fifth campus in Loxahatchee Groves in 2016.

The campus will create greater access to higher education and job training for residents and businesses in the county’s growing west central area. It is a significant milestone for the 82-year-old College, which built its fourth campus more than 30 years ago. It also is one of the first major developments in Loxahatchee Groves, a rural, newly incorporated town of about 3,000 residents. The campus also represents one of PBSC’s last major initiatives under the leadership of President Dennis P. Gallon, who will retire June 30 after nearly 18 years at the helm.

More than 100 people, including Town Council members and business and community leaders, attended a groundbreaking ceremony Nov. 7 on the 75-acre campus site at the northwest corner of Southern Boulevard and B Road. The site includes more than 1,000 feet of frontage on Southern Boulevard, which the Florida Department of Transportation plans to widen to six lanes from Palms West Hospital to 20-Mile Bend. The campus will make access to classes easier for those in Loxahatchee Groves, Loxahatchee, Royal Palm Beach, Wellington, The Acreage and surrounding communities. 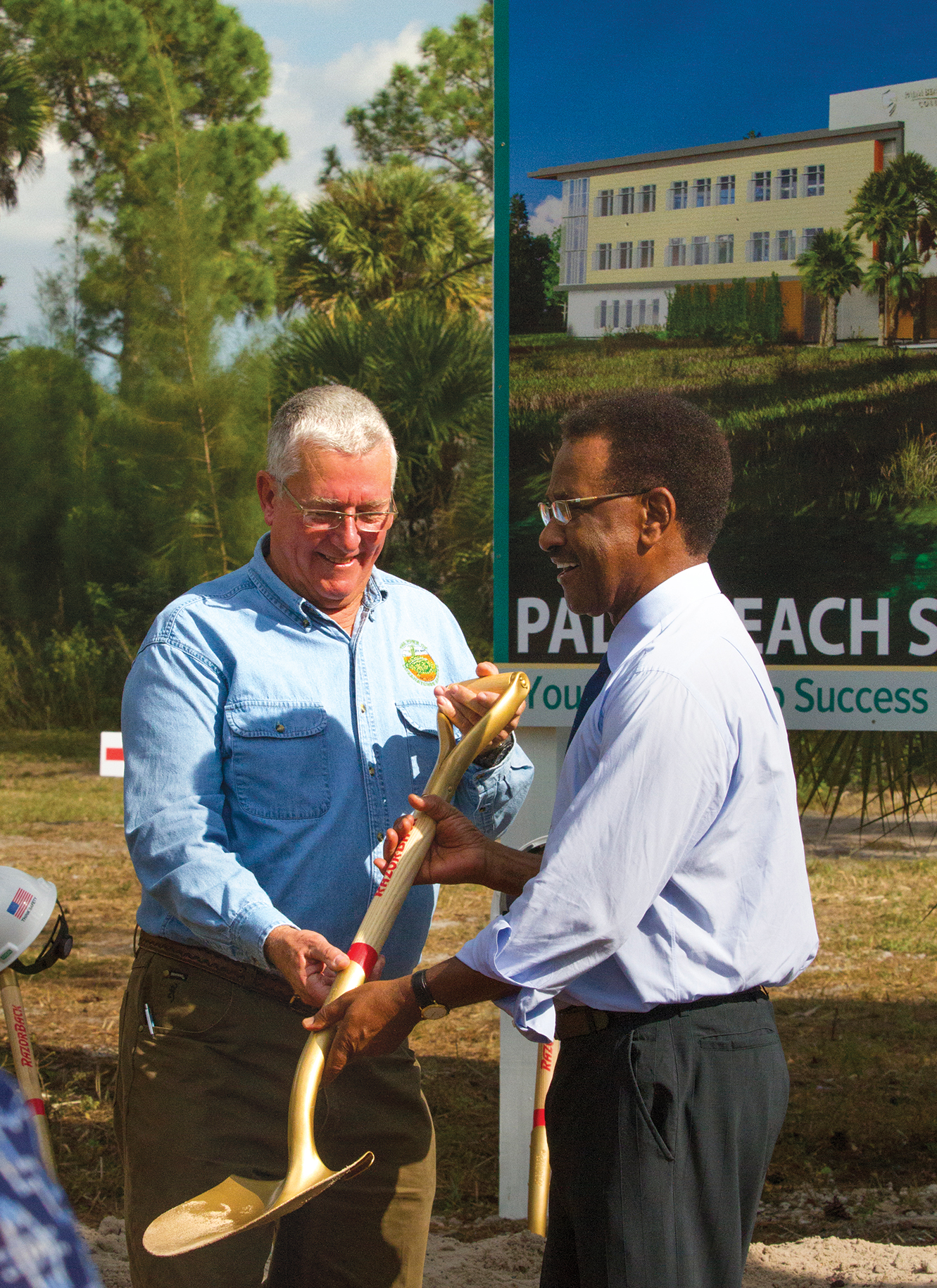 “This is one of the most underserved areas in Palm Beach County,” Gallon said. “A majority of the growth that is taking place now and in the next 20 years will be in that area.”

“With this campus, we will fill in the gap as far as making education and training opportunities accessible for all Palm Beach County residents.”
Dr. Dennis P. Gallon, PBSC president

The first building will be a three-story, 50,000-square-foot multipurpose facility with classrooms and computer labs, administrative offices, a 250-seat lecture hall and ancillary support spaces. It contains 468 student stations. This phase, which includes the building and site design, paving, drainage, utility infrastructure and the furniture, fixtures and equipment, is expected to cost $25 million. James Storms, PBSC’s Facilities Planning assistant manager, said current plans are to add two additional buildings within five to seven years depending on enrollment and the availability of construction funding. The next two buildings will include labs, a library/study space, a cafeteria and a student center. He said the College is striving to create a “net zero campus” meeting the highest green construction standards.

“We are very excited to have the campus as part of our community,’’ said Dave Browning, mayor of Loxahatchee Groves. “We really want to keep a very laid-back lifestyle much like what we have. We like the fact that the College is going to be low impact to our community. It will provide services and a beautiful campus that will reflect the type of lots we have for our homes and the overall look of the community.”

A decade in the making
The idea of a possible fifth campus first surfaced in August 2004 when the District Board of Trustees authorized Gallon to pursue a feasibility study. Zabik & Associates, a Royal Palm Beach consulting firm, conducted the study in 2005 and concluded that with the county’s projected population growth over the next 25 to 30 years, the College would need a fifth campus. The study looked closely at drive times to existing campuses and where the growth would occur in the county. Palm Beach County’s population is expected to increase by 600,000 by 2030, from about 1.3 million to about 1.9 million people, the study noted. The study concluded that the area most likely in need of servicing by the College, based on the population projections, is bounded to the north by Northlake Boulevard, to the south by Lake Worth Road, to the east by Florida’s Turnpike and to the west by 20-Mile Bend.

“The study showed that we were providing adequate access with the exception of that area,’’ Gallon said. “We looked at several sites within that border.”

The Florida Board of Education approved Palm Beach State’s request to build a fifth campus in April 2006. The College finalized the purchase of 75 acres in Loxahatchee Groves in October 2012, and in October 2013, the District Board of Trustees voted to spend up to $4 million for architectural design, infrastructure and site work. The board also approved the educational specifications for the entire first phase of the campus.

“I’m delighted that Palm Beach State is opening a campus to serve high school students graduating from schools in the western communities,’’ said Wayne Burns, chief executive officer of the Central Palm Beach County Chamber of Commerce. “I think having a college campus out here will provide an enhanced opportunity to create relationships between the business community and the College to provide workers with the training and skills necessary to fulfill the needs of local businesses.”

Legislative funding budgeted for the project was approved by the governor last year. Gallon said he is pleased to see the campus finally come to fruition.

“This is another great moment in the history of Palm Beach State, and I believe this campus will be a jewel for those west central communities,’’ Gallon said. “Our goal always has been to ensure that we’re serving and meeting the educational needs of the community. With the establishment of this campus, we will fill in the gap as far as making education and training opportunities accessible for all Palm Beach County residents.”