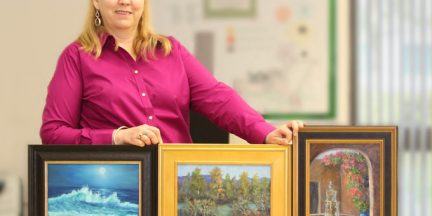 Four and a half years ago, Amber Palomares, a career development advisor and adjunct instructor, picked up her first paintbrush.
“I always loved art,” said Palomares. “I would go to local art shows and visit artist booths. I couldn’t get it off my mind.”
This passion led Palomares to try painting for herself, which led to hours of practicing and perfecting her work. To advance her skills, she even took a drawing class at the Palm Beach Gardens campus from Associate Professor of Visual Art Jacques de Beaufort. … END_OF_DOCUMENT_TOKEN_TO_BE_REPLACED

Palm Beach State College Professor Stephen Gibson has won a Donald Justice Poetry Prize for his latest poetry collection “Rorschach Art Too.”
The award, open to all American poets, comes with a cash prize and a publication deal. Gibson said his poetry collection is scheduled for publication in June.
He is among four winners selected during the biennial competition coordinated by the Poetry Center at West Chester University in Pennsylvania; two were selected for 2014 and two for 2015.  … END_OF_DOCUMENT_TOKEN_TO_BE_REPLACED

The murder of Palm Beach State College staff member Dacota Stewart-Dick in her Parkland home Sunday has sent shock waves through the College community, as employees and students struggle to cope with the tragedy.
A candlelight vigil will be held at 5:15 p.m. Wednesday, Feb. 5, for students, faculty and staff to honor the memory of Stewart-Dick, PBSC First-Year Experience program manager.  The vigil will take place in the MLK Plaza, Lake Worth campus.  Grief counselors also have been made available through the College Counseling Center and the Employee Assistance Program to support co-workers and students as needed. … END_OF_DOCUMENT_TOKEN_TO_BE_REPLACED

Distinguished educator, community leader and Palm Beach Junior College retiree Jesse E. Ferguson, Sr., died Jan. 1 at the age of 91.
Mr. Ferguson joined the PBJC faculty in the guidance department in 1971.  Five years later, he was named assistant registrar of the College and served in that role until his retirement in the early 1980s.  A career educator, he had earlier served as a faculty member, counselor and director of student personnel at Edward Waters College in Jacksonville and as a guidance counselor at John F. … END_OF_DOCUMENT_TOKEN_TO_BE_REPLACED

Two of the Panthers’ four sophomores in women’s basketball have already made commitments to play at the next level for their junior and senior seasons.
Ashley Jones, a sophomore forward, will continue her career at “THE U” (Miami University) and Alana Arias has committed to be a Ram next year attending Colorado State University. Both students signed full grants-in-aid at their respective institutions.
Jones, who has already been the FCSAA Player of the Week this season, … END_OF_DOCUMENT_TOKEN_TO_BE_REPLACED

Retired Palm Beach State College sociology professor Dr. Richard E. Yinger passed away Jan. 9 at the age of 73.
A widely respected scholar with a national reputation, Dr. Yinger joined the faculty of Palm Beach Junior College in Lake Worth in 1974 and retired in 2006. Throughout his career, he was honored with several teaching awards, including Teacher of the Year from the PBJC Student Government Association in 1980 and FACC’s Little Red Schoolhouse for Florida Teacher of the Year in 1985. … END_OF_DOCUMENT_TOKEN_TO_BE_REPLACED 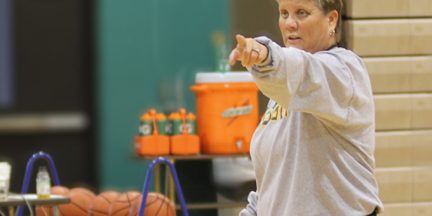 Kris Ruffo, head coach of Palm Beach State College’s women’s basketball team, earned her 300th overall career win Jan. 11  when she led the panthers to victory against southern conference rival St. Petersburg 70-57. To date, she has achieved 106 wins as head coach at Palm Beach State.
The team is currently #4 in the Florida College System Activities Association rankings and #17 in the National Junior College Athletic Association poll. Ruffo has taken her teams to the FCSAA “Elite 8” of the State tournament three of the past five years and gone to the “Final Four” twice. … END_OF_DOCUMENT_TOKEN_TO_BE_REPLACED

English professor Brad Johnson has released his first, full-length poetry collection titled “The Happiness Theory” from The Main Street Rag.
“Brad Johnson’s poems are visceral, memorable, and striking in the way they dwell in reality, yet take sudden surrealistic leaps,” said Diane Thiel, internationally recognized poet and author. “The poems in this collection grapple with various kinds of love and connections, and particularly issues of parenting with a touch of dark humor that has resonance on a number of levels. … END_OF_DOCUMENT_TOKEN_TO_BE_REPLACED

Be Creative, Be Useful, Be Practical, Be Generous – this is the philosophy of actor John Lithgow, who will be the keynote speaker for the Palm Beach State College Foundation’s STEAM fundraiser Jan. 30.
The event, titled “Inside the Mind of John Lithgow” is expected to attract more than 600 guests and is presented by Bank of America. It will be held at 11:30 a.m. at the Kravis Center for Performing Arts.
The goal is to raise money to support STEAM scholarships, … END_OF_DOCUMENT_TOKEN_TO_BE_REPLACED