All posts by Staff Report 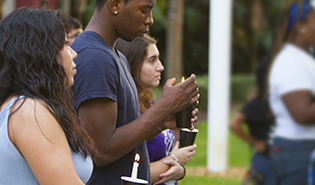 Almost 200 students, faculty and staff members came together Feb. 5 for a candlelight vigil to honor the memory of Dacota Stewart-Dick, Palm Beach State College’s First-Year Experience manager. Stewart-Dick was killed Feb. 2 in her Parkland home.
Gray clouds and light showers misted the Lake Worth campus MLK Plaza as the service began, yielding the sky to a soft rainbow midway through the service.  Grieving along with family members,  the College community heard student musical tributes and shared recollections of special moments. … END_OF_DOCUMENT_TOKEN_TO_BE_REPLACED

Palm Beach State College Professor Stephen Gibson has won a Donald Justice Poetry Prize for his latest poetry collection “Rorschach Art Too.”
The award, open to all American poets, comes with a cash prize and a publication deal. Gibson said his poetry collection is scheduled for publication in June.
He is among four winners selected during the biennial competition coordinated by the Poetry Center at West Chester University in Pennsylvania; two were selected for 2014 and two for 2015.  … END_OF_DOCUMENT_TOKEN_TO_BE_REPLACED

The murder of Palm Beach State College staff member Dacota Stewart-Dick in her Parkland home Sunday has sent shock waves through the College community, as employees and students struggle to cope with the tragedy.
A candlelight vigil will be held at 5:15 p.m. Wednesday, Feb. 5, for students, faculty and staff to honor the memory of Stewart-Dick, PBSC First-Year Experience program manager.  The vigil will take place in the MLK Plaza, Lake Worth campus.  Grief counselors also have been made available through the College Counseling Center and the Employee Assistance Program to support co-workers and students as needed. … END_OF_DOCUMENT_TOKEN_TO_BE_REPLACED

Palm Beach State College has been named one of the top 150 community colleges in the country by the Aspen Institute.
The Washington, D.C.-based educational and policy studies organization on Thursday released its list of top community colleges based on exceptional levels of student success. Only the colleges that make the list are eligible to compete for the prestigious 2015 Aspen Prize for Community College Excellence worth $1 million.
The Aspen Institute reviews publicly available data to determine which community colleges around the country demonstrate student success in three areas: student persistence, … END_OF_DOCUMENT_TOKEN_TO_BE_REPLACED

Distinguished educator, community leader and Palm Beach Junior College retiree Jesse E. Ferguson, Sr., died Jan. 1 at the age of 91.
Mr. Ferguson joined the PBJC faculty in the guidance department in 1971.  Five years later, he was named assistant registrar of the College and served in that role until his retirement in the early 1980s.  A career educator, he had earlier served as a faculty member, counselor and director of student personnel at Edward Waters College in Jacksonville and as a guidance counselor at John F. … END_OF_DOCUMENT_TOKEN_TO_BE_REPLACED

Retired Palm Beach State College sociology professor Dr. Richard E. Yinger passed away Jan. 9 at the age of 73.
A widely respected scholar with a national reputation, Dr. Yinger joined the faculty of Palm Beach Junior College in Lake Worth in 1974 and retired in 2006. Throughout his career, he was honored with several teaching awards, including Teacher of the Year from the PBJC Student Government Association in 1980 and FACC’s Little Red Schoolhouse for Florida Teacher of the Year in 1985. … END_OF_DOCUMENT_TOKEN_TO_BE_REPLACED