Palm Beach State College has received the U.S. Department of Defense’s prestigious Employer Support of the Guard and Reserve Seven Seals Award for its initiatives and leadership to support student service members and veterans.

“Staff members at PBSC’s three veterans resource centers are committed, knowledgeable and advocate for all military connected students,” said Peter Caspari, the State of Florida director of employer outreach for the DOD’s ESGR agency, who presented the award to the College during a Black History Month program recognizing African Americans’ contributions to the military. “When deployment orders come, they are readily available to assist students and ensure they are not negatively impacted academically or financially. That is so important. A lot of colleges and universities still today do not do that.”

The Seven Seals award is presented at the discretion of the ESGR program’s senior leadership and is regarded as the program’s most inclusive and broadest recognition.

PBSC was also acknowledged for:

PBSC was nominated for the award by Caspari, who learned more about the College after a PBSC employee nominated his supervisor for a ESGR Patriot Award.

The Seven Seals award was presented to Van Williams, Army veteran and provost and dean of student services at the Boca Raton campus, who served as the moderator for the panel discussion “Fueling the Force: African Americans’ Contributions to the Military.” The collegewide event, held Feb. 24 in the Duncan Theatre and also livestreamed on all campuses, was the first of its kind hosted by PBSC and featured five veterans who collectively served more than 100 years in the military and who shared their personal stories of leadership and service.

“It was an honor to accept the Seven Seals Award on behalf of the College,” said Williams. “I am so proud to work at an institution that is a true supporter of the military community through its actions, programs and philanthropy.”

The Seven Seals Award is presented in recognition of significant individual or organizational achievement, initiative, or support that promotes and supports the ESGR mission, to include the efforts of the more than 3,600 volunteers who carry out ESGR’s mission across the Nation on a daily basis. 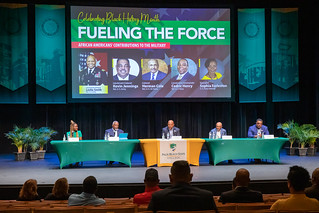