Parker elected to serve on AACC board

Palm Beach State College President Ava L. Parker, J.D., has been elected by her peers from around the nation to serve on the board of directors of the American Association of Community Colleges. 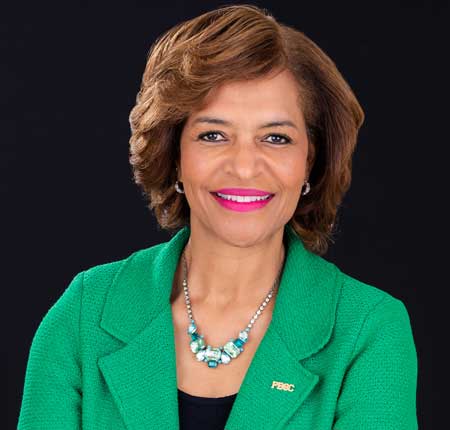 She is among eight newly-elected board members who will serve three-year terms beginning July 1. Six institutional members and two affiliated council members, all current community college chief executive officers, were elected to join the 32-member board. Parker was one of 13 CEOs nominated in the institutional member category.

The AACC is the primary advocacy organization for the nation’s community colleges. It represents nearly 1,200 two-year, associate degree-granting institutions and more than 12 million students. The board of directors acts on behalf of the institutional members to create and maintain a vision for AACC and to determine and ensure that the organization adheres to appropriate standards of performance.

“Ava Parker is highly respected by her peers around the country, as evidenced by her election to a coveted position on the AACC board,” said AACC President and CEO Walter G. Bumphus. “I am confident that she will represent and advocate for community colleges effectively on the national level.  The AACC staff, current board members and I look forward to welcoming her to the board of directors.”

Parker, PBSC’s fifth president and first female, will mark her fifth year at the helm of the College on July 1, the same day her term begins on the AACC board. She previously served in 2018-2019 as chair of the Council of Presidents, which includes the leaders of the 28 state and community colleges comprising the Florida College System. She currently serves on numerous other local, state and national boards and committees.

“I’m honored to have the opportunity to expand our work to a larger platform on the national level,” Parker said. “Community colleges are critical to our communities and our workforce. I want to do as much as I can to advocate for and raise awareness of the impact that we make on the lives of individuals every day. Collectively, we have opened doors for tens of thousands of students who otherwise may not have had an opportunity to get an education.”

8 comments on “Parker elected to serve on AACC board”