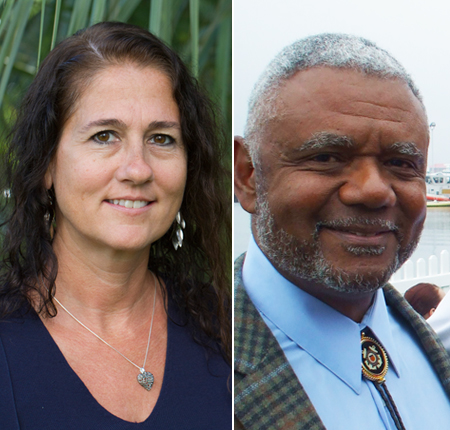 Palm Beach State College English Professor Robin Fiedler and Stephen Spencer, an instructor in the Marine, Automotive and Diesel Technology programs, are among this year’s recipients of the National Institute for Staff and Organizational Development Excellence Award.

The awards are presented annually to faculty and staff ― selected by their respective institutions― for their outstanding teaching and contributions to their campuses. Plans were underway to recognize and present the honorees with their medallions at NISOD’s International Conference on Teaching and Leadership Excellence in Austin, Texas this month, but the event was cancelled because of the Coronavirus pandemic. Online convenings are being planned instead, and NISOD will recognize the honorees on its website and social media platforms and in its newsletters and Excellence Awards booklet.

“It’s an honor to get national recognition for service to the College,’’ Fiedler said. “It’s such a pleasant surprise that your administrators and supervisors are paying attention to what the faculty are contributing to the College mostly for student success.”

Fiedler, a PBSC alumna, taught in corporate settings before beginning her higher education teaching career in 1997. She worked at colleges and universities in Florida, California, Africa and Asia before joining PBSC as an adjunct instructor in 2008. She landed a full-time professor position at the Palm Beach Gardens campus in 2012. She currently serves as a continuing contract coach and has served as English Cluster chair in 2013-2014 and the Palm Beach Gardens campus Professional Teaching and Learning Center chair in 2015-2017.

In addition to her A.A. degree from PBSC, Fiedler holds a Bachelor of Fine Arts degree in Theatre, as well as bachelor’s and master’s degrees in English from Florida Atlantic University.

“Professor Fiedler rightly deserves this reward because she makes excellence her cornerstone,” said Dr. Linda Lebile, associate dean of academic affairs on the Palm Beach Gardens campus. “She personifies diligence and conscientiousness and welcomes opportunities to support students and Palm Beach State College. She does an outstanding job in providing her students with instruction to help them succeed. Her students connect well with her and recognize that she cares about them as students and individuals.”

Spencer, a native of Louisville, Kentucky, began his teaching career in 2001 after a retiring from a 31-year career in the U.S. Coast Guard. As a machinery technician, he provided maintenance and repair on Coast Guard boats and stations. He was assigned to Coast Guard cutter Dauntless and as the senior engineer on the cutter Hawser and Kanawha. His last assignments were as command master chief of three major areas of the country.

He taught diesel technology at Advanced Technology Institute in Virginia Beach and automotive technology at New England Tech in West Palm Beach before joining PBSC as an automotive and diesel technology instructor. He left PBSC to take a teaching position at Central Texas College, Germany. However, after his stint in Germany, he returned to the College in 2015 and continued his work in the Transportation Service Technology department, where his supervisor says he is a great asset.

“Stephen has developed on his own time lots of training aids to help explain better to the students the different components and functions of the parts of the vehicles,’’ said Eligio Marquez Veray, Transportation Service Technology program director.

Marquez Veray also credited Spencer with helping to launch the College’s new Marine Service Technology Program, a task he gave him after a series of meeting in 2018 with the Riviera Beach Workforce Taskforce. “We got it up and running by August 2019. He has been working diligently in creating trainers now for this new program.”