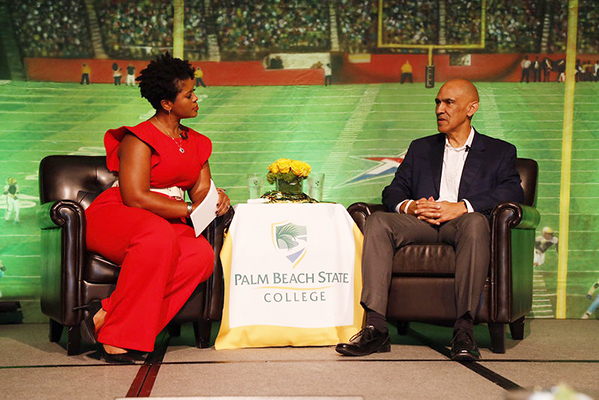 Tony Dungy, NFL Hall of Fame coach and New York Times bestselling author, described the characteristics of great leaders and the keys to success to a crowd of more than 650 Feb. 20 as the featured guest speaker at Palm Beach State College Foundation’s 8th annual STEAM luncheon.

“As a leader, you have to know where you are going and that’s going to help you take other people there,” Dungy said.

Dungy, who led the Indianapolis Colts to a Super Bowl win in 2006, has been developing his leadership skills since the start of his coaching career in 1980.

“You also must lead people not by pushing them but by bringing them with you,” he told the audience.

“Whether I was the quarterback on the middle school team or student council president or head coach of the Indianapolis Colts, it was still the same thing. I know what my goals are, and what my vision is but how do I now get people to follow me. That is the most important question.”

Dungy not only spoke about leadership and mentoring but also fatherhood, football and education during the sold-out event, which was moderated by Emmy award-winning sports anchor Keli Ferguson and presented by Bank of America in the Kravis Center for Performing Arts Cohen Pavilion banquet room. Its walls adorned with images of a gigantic football stadium thanks to the leadership of south Florida businesswoman and philanthropist Yvonne Boice, who has been chairing the event since its inception.

When wanting followers, he shared the biggest challenges he and other leaders face.

“Not everyone is going to agree with you,” Dungy said. “You have to be a salesman. Your players might not have the same thoughts as you do. However, I knew I didn’t want to motivate them with fear. I wanted them to know that I knew what I was doing and that I really cared about them. You always want those two things to come back to their minds.”

Dungy also mentioned that you must be steadfast and persistent and remember that it’s okay to say you don’t have all the answers.

Fatherhood has also changed his perspective on leadership. Dungy has 10 children, with his oldest about to turn 35 years old and his youngest age 4.

“Whether you are a professional football coach or a dad at home, you’re trying to get the best out of everyone and help them be the best they can be. And everyone is different. That is the one thing you must learn. Whether it’s 53 players or 10 kids, each one of them clicks a little differently, and I must figure that out. Coaching was good training for that because you’re doing the same thing.”

“We had what he called Family Saturdays which meant at practice you always brought your kids. My kids were there all the time, and I instituted that same practice when I went to the Indianapolis Colts.”

Dungy admits that it can be challenging for some, especially for the mother or father who is a workaholic. However, he says the most important thing to remember is just to spend time with your children.

“It’s hard especially for the men because we want to provide for our family and make sure they have everything. However, it’s not what we can buy for them but the time we can spend with them.”

Dungy gave an example of this right after he moved to Indianapolis. While he still had boxes to unload, he stopped to play a baseball game with his 10-year-old son, Eric, because he was fidgety and wanted to do something. He and Eric made a ball of tape and used a broomstick for a bat because all his toys were still in boxes.

Years later, he asked him of all the cool things about him being his dad what he thought was the coolest.

“He had been to playoff games and met Randy Moss and got to do all these things that most kids would only dream of doing and being on tv. And, he said the coolest thing was when he beat me 28 to 3 in that baseball game.”

Dungy also shared a conversation he had with PBSC student Luiz Padredi that revealed the importance of the PBSC STEAM luncheon.

Padredi, who was in attendance, had a dream of going to college, but he didn’t have the financial means to do it. He worked two and a half years before he came to Palm Beach State.

Now a student with a 4.0 GPA in biomedical engineering, he told Dungy he almost didn’t come back this year because he wouldn’t have had the money to pay for everything. Luckily, he got in touch with the PBSC Foundation and was able to obtain a scholarship.

“What if we weren’t there to help people who had these kinds of dreams and abilities,” Dungy said. “Wouldn’t it be a shame for a 4.0 student to say I can’t come back because of finances. Your participation here allows PBSC to do what it does best which is to develop leaders – something that our country needs.”

Dungy also expressed how excited he was to partner with PBSC because the College shared the same values as his dad, Wilbur, who grew up in a small town in Michigan and had a dream of going to college.

With limited financial opportunities, Wilbur decided to go to a community college, where he earned an associate degree before going on to earn a Ph.D. in biology from the University of Michigan. He also became the first African American professor in the junior college system in Michigan.

“It was all because of that community college,” Dungy said. “He met people there that fostered that idea of growing and learning and becoming a leader.”

At the event, PBSC President Ava L. Parker, J.D. also thanked Boice who spoke about her role as chair of the event.

“Eight years ago, when I accepted this role it would have been impossible to envision the impact this community gathering would have on so many lives. Now as I reflect on our achievements, I feel so honored to have witnessed the evolution of an idea which continues to broaden and grow. I am confident that the STEAM initiative will expand its influence for the next decade in ways I can only image.”

The STEAM Luncheon is PBSC’s signature event to increase scholarships, business partnerships and internship opportunities to support students pursuing science, technology, engineering, arts and mathematics fields. This year, the College also celebrated its achievements in enrollment, completion and other areas that have transformed the lives of students and strengthened the community. 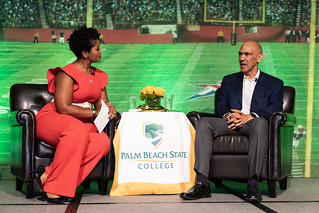