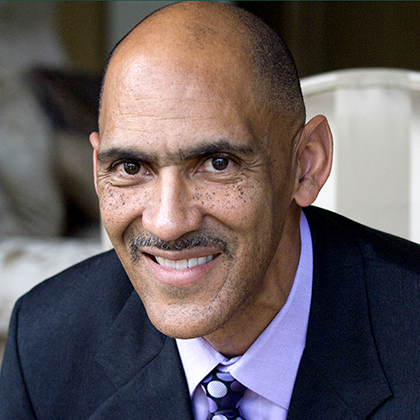 The highly anticipated STEAM Luncheon is PBSC’s signature event to increase scholarships, business partnerships and internship opportunities to support students pursuing science, technology, engineering, arts and mathematics fields. This year, the College will also celebrate its achievements in enrollment, completion and other areas that have transformed the lives of students and strengthened the community. Presented by Bank of America, it is set for 11:30 a.m. Thursday, Feb. 20 at the Kravis Center for the Performing Arts Cohen Pavilion in West Palm Beach.

“Tony Dungy is a respected and admired leader both on and off the field,” said PBSC President Ava L. Parker, J.D. “His participation in our STEAM Luncheon will help amplify our initiatives to expose our students to critical STEAM fields and support the STEAM employers in our area.”

Dungy led the Indianapolis Colts to Superbowl victory in 2007 and became the first African American coach to win the NFL championship. A former NFL defensive back, he got his start as a head football coach with the Tampa Bay Buccaneers in 1996. During his 13 seasons with the Colts and the Buccaneers, he achieved a 148-79 overall record and became the first NFL coach to lead his teams to the playoffs for 10 consecutive years.

Dungy retired from coaching in 2009, and he was inducted into the Hall of Fame in 2016, again becoming the first African American coach to be so honored. He now serves as an analyst for NBC’s “Football Night in America” and spends time sharing his lessons on life, leadership and fatherhood, which he says is his most important job. He and his wife, Lauren, have been married for 36 years and are the parents of 10 children, seven of whom are adopted. Dungy, whose books include “Quiet Strength,” “Uncommon,” and “The Mentor Leader,” has served for 21 years as the national spokesman for All Pro Dad, the fatherhood program of the nonprofit organization Family First.

“Tony Dungy has been more than a coach for players. He’s been a mentor for life, empowering young lives through the power of leadership, integrity and character,’’ said David Rutherford, vice president of Institutional Advancement and executive director of the PBSC Foundation. “All of us can take an inspirational page from his playbook.”

The STEAM Luncheon is chaired by South Florida businesswoman and philanthropist Yvonne Boice. Tickets are $150, and sponsorship opportunities are available. For more information, visit www.palmbeachstate.edu/foundation/steam.