One hundred and thirty-six players enjoyed a great round of golf recently during Palm Beach State College Foundation’s 2019 Golf Classic at PGA National Resort and Spa – home of the Honda Classic in Palm Beach Gardens.

Themed, “Be our Champion,” the sold-out event was held April 26 to raise funds for student scholarships. There were more than 50 local companies that sponsored or had employees play in the tournament.

“Helping students in need has always been a desire of Fastrack MCI, so we’re pleased to be a longtime supporter,” said Sasha Bubanja, executive vice president and co-owner of Fastrack MCI. “Through our participation, we know we are helping so many deserving students continue their education who normally would not have had that opportunity, enhance their job skills, and improve their lives and their families lives’.”

Also in attendance was PBSC President Ava Parker, J.D. who thanked the players and sponsors who helped make the tournament a success and emphasized how critical it is for companies such as Fastrack and others to partner with the College.

“Every time you walk out of your neighborhood, you run into someone who has a certificate or degree from PBSC,” she told the crowd at the closing awards ceremony and cocktail reception. “That is why it is so important that we hold events like this to continue this tradition and enable these students to graduate and contribute to companies such as yours and to Palm Beach County.”

In addition to elevating student success, a goal of the tournament this year was to also enhance the participant involvement with the McDonald’s Championship Experience. The new feature allowed players to enjoy some pre-golf hospitality which included custom shoe and golf glove fittings in the members club of PGA National Resort.

“I’ve been participating and supporting this event since its inception,” said Kirk Stetson, PBSC facilities planning manager.  “This was the best Palm Beach State College Foundation Golf Classic ever. From the number of participants to the course, PBSC really stepped up their game.”

During the reception, the top three teams were also announced. Included among the top winners was former major league baseball star Andres Galarraga.

First place went to the team from Tierra South Florida, Raj Krishnasamy, Sam Talluto, Vikash Salig and Roy Hart with a score of 55. Second place was Don Scharkey, Scott Butler and Robert Perry of Independent Electrical Contractors with a score of 56 and third from the McDonalds Tri-County Group, Ricky Wade, Pedro Toks, Galarraga and Mark Rogers with a score of 58.

The winning team took home the Panther Cup trophy, named after the College mascot. The concept for the trophy was created by Foundation Chairman Ricky Wade, who also presented it to the winners. The Panther Cup will be displayed in the PBSC district office lobby in Lake Worth with the winner’s names engraved on it.

To see photos from the day, click on the gallery below. 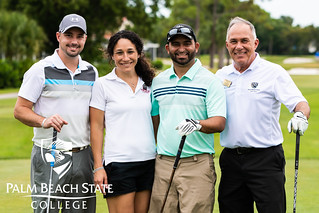