Themed, “Swing for Student Success,” the event raised more than $140,000 which will go toward STEAM (Science, Technology, Engineering, Arts and Math) student scholarships as part of the College’s STEAM initiative.

During a closing awards ceremony and cocktail reception, the top three teams were announced and prizes were given for those who won the longest drive, straightest drive and closest to the pin contests, among others.

The team of Jesse Lee, Mitch Crissman, Oscar Dominguez and Jerry Springer in the Tripp Electric Motors, Inc. group took first place with a score of 50. Second place went to Ted Cava, Michael Bird, Sean Denyse and Kevin Bell in the Gilbane Building Company group with a score of 53 and third was Ricky Wade, Lance Ivey, Donny Wright and John Powers from the McDonald’s Group with a score of 54.

The winning team took home a new award this year: the Panther Cup trophy, named after the College mascot.

“We are very proud of all of you for participating in this event and proud to present this new award,” said Ricky Wade, chairman of the PBSC Foundation board of directors. “It not only symbolizes all the hard work of the Foundation but also the ongoing efforts to raise funds for scholarships to support student success and grow our community.”

The Panther Cup will be displayed in the PBSC district office lobby in Lake Worth with the winners names engraved on it. A smaller version of the trophy was taken home by the team.

To date, the golf tournaments have raised more than $1.8 million over the last 13 years and funded more than 1,000 scholarships. For more information about the annual Golf Classic, visit www.palmbeachstate.edu/Foundation/Golf. 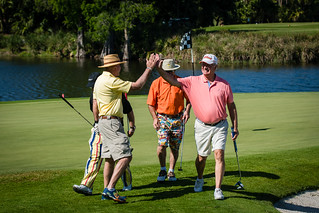