Diving with tiger sharks off the coast of Mexico, exploring the coral reefs along Panama or painting sea creatures on the hull of a massive cruise ship. These are some of the ways Dr. Guy Harvey spends his days.

The marine biologist who gained international recognition for his paintings of sea creatures, spoke Wednesday at the Palm Beach State College Foundation’s sixth annual STEAM luncheon. He took the more than 500 attendees on a journey through his 32-year career. The event was held at the Kravis Center for Performing Arts Cohen Pavilion, which was decorated with pictures of coral reefs and sea life.

Harvey showcased more than 20 pieces of his artwork of birds, turtles, sharks, bill fish, dolphins, stingrays and more that he said were painted from personal experience. He spoke fondly about his early childhood in Jamaica, where his love of nature developed.

“Both my parents loved fishing,” said Harvey, a 10th generation Jamaican. “We spent many hours fishing and diving together and caught all kinds of fish. Those early experiences built a love of the sea in me and I became fascinated with fish.”

Harvey, who grew up in a military family, eventually moved to England when he was eight years old. After graduating high school, he earned a degree in marine biology from Aberdeen University in Scotland. He then went back home and earned a Ph.D. in fisheries biology from the University of the West Indies.

He served as a professor for a short time; however, he never stopped drawing and painting sea life. In the early 1980s, Harvey decided to exhibit his artwork in a few hotels in Jamaica.

“I sold some of my art and my career began,” Harvey said. He then sold all of his work at his first appearance at a Fort Lauderdale boat show. The Guy Harvey brand developed from then on. Today, his artwork is seen all over South Florida and beyond at SeaWorld, the Norwegian Escape cruise line, Ford Motor Company, as well as on license plates, jewelry, clothing and more.

Harvey told the crowd that his passion is not limited to art; he is also very involved in conservation efforts. For years, he has been making regular trips throughout the Caribbean and beyond to collect data.

“There is a lack of research on so many different species,” Harvey said. “Without data, you can’t really study them. With data, you can educate people and effect conservation.”

To help in these efforts, Harvey established the Guy Harvey Research Institute at Nova Southeastern University in Fort Lauderdale and the Guy Harvey Ocean Foundation, Inc.

One of his research projects is to tag sharks to study their travel patterns. These sharks include tiger sharks, oceanic white tips and shortfin mako sharks, which Harvey described as the “coolest and fastest” of the species.

“These sharks are not wandering aimlessly,” Harvey said. “They know where they are, where they’ve been and where they’re going. Some travel thousands of miles to up to five different countries.”

Harvey and his team of researchers also track many other species throughout the Caribbean, Gulf of Mexico and beyond including blue marlin, white marlin, sailfish and stingrays.

According to Harvey, the reefs are being threatened all over the world by many factors including climate change, overfishing, poor agricultural practices and disease.

“There is a lot to do,” Harvey said. “I team up with a lot of people, and we like to collaborate together. It’s our collective responsibility to help with these efforts.”

As his speech came to a close, Harvey encouraged the crowd to contribute to conservation efforts.

Harvey said one easy way people can contribute to conservation efforts is by purchasing specialty license plates such as with the Guy Harvey Ocean Foundation plate where annual fees are donated to the foundation to fund marine-related scientific research.

Proceeds from the luncheon will go toward the College’s STEAM initiative, a multi-year initiative to impact the projected shortage of local, skilled professionals in the STEAM (Science, Technology, Engineering, Arts and Math) fields. To date, the initiative has raised $2.5 million to fund new student scholarships, develop academic program enhancements, provide new internships for students and build new business and community partnerships. 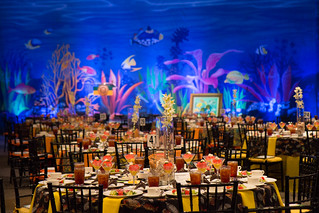 One comment on “Harvey talks art, passion for sea life”