‘Be the best you can be,’ says Patrick during PBSC’s STEAM luncheon

The event raised money for the Foundation’s STEAM (Science, Technology, Engineering, Arts and Math) initiative to help prepare students for the high-paying, high-demand positions immediately available in these industries.

Before Patrick’s remarks, Yvonne Boice, event chair, announced that the Boice Family Foundation would give $150,000 toward student scholarships in STEAM fields.

During the conversation-style interview, moderated by Dan Cane, CEO of Modernizing Medicine, Patrick spoke about starting her racing career go-karting with her younger sister, the technology that goes into the design and materials of her race cars, and ways to inspire more young women to enter and stay in STEAM careers.

“It’s about taking something they’re interested in and letting that grow,” said Patrick. “We need to nurture those interests and show them the many ways they can use their talents. I firmly believe that you can make a career out of anything that you’re interested in. You just have to figure out how to adapt it into a job.”

Patrick also noted that although many women see her as an inspiration in the male-dominated world of race car driving, she doesn’t feel the pressure of being a role model to women.

“I don’t feel different, and I don’t want to single anyone out because of gender or anything else,” said Patrick. “I never had a role model so I didn’t want to be like anyone else. I just wanted to be the best I could be and I encourage everyone else to do the same. I can give advice to a woman, but I would do the exact same thing for a man,” said Patrick.

When asked what race day was like and more importantly the physical toll it takes on her body, Patrick said “It’s basically like doing a marathon. This is why I rely so much on my engineers. If my engineers do a good job, it’s easy to drive. However, the heat inside the car is the worst. It will reach anywhere from 130 to 140 degrees and a lot of drivers have passed out.”

Patrick also explained some of the key factors to winning a race.

“You always want to establish good teamwork with your engineers, and as a driver your experience gives you an advantage too. I can help identify by experience what needs to be adjusted based on the feeling I get while driving the car. Instinct plays a big role, too.”

Looking to the upcoming season, Patrick says she feels very optimistic, but no matter what the outcome is of any race she will always be making short-and long-term goals which she says is the main reason she wanted to be in the racing business.

“I’m doing something I love and truly enjoy, but more so than that I just love to set a goal and accomplish things,” said Patrick.

To learn more about opportunities to support the Foundation’s STEAM initiative, visit www.palmbeachstate.edu/foundation/steam/ or call 561-868-3450. 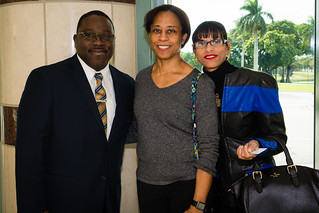